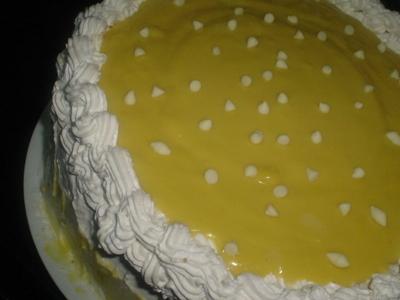 Yema Cake from the Philippines

Are you are looking for birthday cake ideas?

Here's a birthday cake that will make grown ups and not just children fight to get some piece of it. I grew up eating yema balls. If you have no idea what yema is then let me give you some.

Yema is a made from condensed milk which needs constant stirring for a sticky texture but sometimes the milk is mixed with egg yolks and other ingredients.

Yema cake from Quezon Province, Philippines are the greatest. This cake is usually part of a birthday cake ideas from someone planning a party or pasalubong (gift from a trip) from someone who has visited this Philippine province. Though yellow yema is not really sticky as your usual yema balls, but it still has that deadly sweet thing. The yema is use as an icing and it is topped with grated cheese. The cake is actually just made of a chiffon cake which usually balances the taste. They say that a party with this cake present isn't usually complete without a fight over who gets to have the corner parts which have the greatest and cheesiest yema icing.

Cooking Procedure :
Pour the condensed milk into a small saucepan. Set the fire to medium to heat it gently. Please do not make the mixture boils.
After you have beaten the egg yolk in a bowl, pour in the half of the heated condensed milk into the bowl and stir to blend in the egg yolk and add all the coconut cream.
Pour the mixture of milk, coconut and egg into the pan and just continue cooking. Stir and scrap the sides and bottom of the pan to prevent discolor or damage texture.
When the mixture thickens a bit, place the powdered milk in a large mixing bowl. Pour in the egg-coconut cream-milk mixture. Add the butter and stir it until texture is ok and smooth. While the mixture is still in semi liquid form, put it on top and at the sides of the chiffon cake like a usual icing. Dress it up with white Icing to make it look better