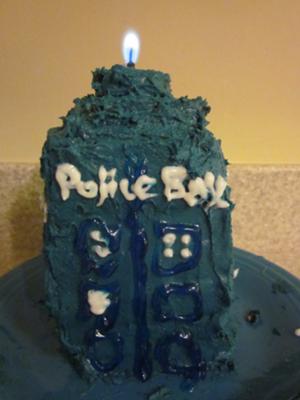 I've recently started taking up Baking as a hobby and I am an avid doctor who fan, so when I decided to make myself a birthday cake it seemed obvious that I had to make a TARDIS.

For those not familiar with Doctor Who, it is a British sci-fi television show. The TARDIS (Time And Relative Dimension In Space) is the titular character's time machine. It is camouflaged as a blue police telephone box so that it doesn't stick out to much, and it is much bigger on the inside. Unfortunately, it is impossible to make a cake that is bigger on the inside.

I made two 8x8 square cakes of a red velvet recipe, then cut those cakes into 4x4 squares and stacked them. Using the tops of the cake, I made smaller squares for the top. I used a peppermint buttercream frosting with plenty of blue food coloring for the outside, and had some white and blue gels which I used for the writing/windows. I used a blue candle for the top. The decorations did not come out as cleanly as I would have liked, but as my first attempt at cake decorating I would say it is alright.

The cake and frosting recipe is here.

I followed that exactly, except I did not use any pecans, I used Soy Milk, I added 1 tsp peppermint extract and blue food coloring to the frosting, and I used regular butter for the frosting instead of a vegan substitute.

That's fab, we love Dr Who, my favorite was Tom Baker. (Showing my age now!)