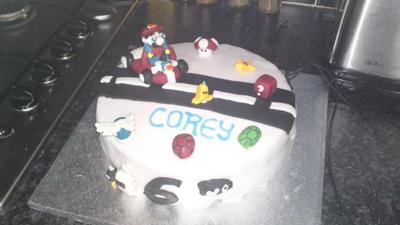 I made this Mario Birthday Cake for my nephews 6th birthday as he loves Mario.

Its a vanilla cake with butter cream and red currant jam filling. I decided to use the main aspects of the game to create the design including Mario in his Kart and the collectible items.

thanks for the super picture of your Mario Birthday Cake. Mario was 25 years old today (12th August 2011), so it's a great time to be searching for Mario birthday ideas.

I did a little research on Mario to find he's an American-italian plumber. The Nintendo game franchise is the biggest in history, a larger earner than harry potter or even Mickey mouse!

Shigeru Miyamoto is the legendary Japanese designer of Mario.

If you're planning a Mario Party, here's some great party games based on the Nintendo game:-

Just as in the game, the children can collect gold coins, hidden round the house or garden. These can go into the Mario Party Favor

Children will recognise 'Bloopers' from the games. The squid like enemies can be copied by blowing up white balloons and drawing eyes and tentacles on them. The children can then have a great time trying to keep the bloopers off the ground, or bursting as many as they can.

This is simply a game of tag, and best played outside in a large space. The person who's 'it', wears a ghost costume and has to tag another person, who then becomes the ghost. There can be a safe space called 'Mushroom Kingdom'.

Mario is infamous for his giant jumps, hops and leaps. Have a jumping contest to see how high, far or long each can hop or jump.

Yoshi is a dinosaur and the hero of the mushroom world. Yoshis hatch from green spotted eggs and can be ridden and swallow the enemies.

Paint hard boiled eggs with green spots and have an egg and spoon race.