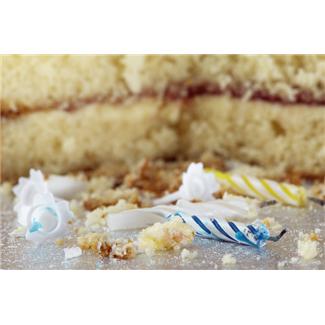 The cake fight birthday tradition began at my sisters house. It was her daughter, Macys, first birthday. We were trying to get her to stick her face in the cake.

I was unaware of the scheming brother in law behind me when I placed my head close to the cake and my niece. In an instant, my face was covered in cake and Macy was screaming. The next birthday came, I believe it was my little brothers. My sister grabbed some cake and slid it down his cheek, starting a cake war. Macy cried.

Thus begun the infamous birthday cake fight tradition. Unfortunately, we have all gotten too old, our kids are too rough, and the mess is too big. Our cake fighting tradition has ended.

It had a good run or 6 years or so. I think we quit when Macy quit crying and started to join in. Once she wanted to join, so did the other little ones. We have a lot of video footage and pictures and memories of cake stuck here and cake found there.

Mom was never happy with it, mainly because she cleaned most of the mess. She would find cake in strange places weeks later! I'd like to continue it, but take it outside.

Join in and write your own page! It's easy to do. How? Simply click here to return to Birthday Traditions.